This week, the world was rocked by revelations from the Pandora Papers, the largest leak of records from tax havens by the International Consortium of Investigative Journalists (ICIJ) and partners, bringing renewed calls for tax haven scrutiny and sending world leaders scrambling. According to the ICIJ, the investigation - the largest journalistic collaboration in history with approximately 12 million records - reveals “the secret deals and hidden assets of more than 330 politicians and high-level public officials in more than 90 countries and territories, including 35 country leaders.” Notably, the documents span five decades and “include information on more than 29,000 beneficial owners, the ultimate owners of offshore assets, [which] is more than twice the number of owners found five years ago in the Panama Papers investigation,” one that spurred protests around the world.

The leak comes on the back of a pivotal moment in global tax reform, with the EU in its State of the Union address last month stating that the bloc will establish new initiatives to tackle shell companies and its president further mentioning the crackdown on tax avoidance and evasion as a priority. And as the G7 pushes 140 jurisdictions to complete a project led by the OECD and G20 to overhaul tax laws, the “global debate over the fairness of the international tax system” shows no signs of slowing as the “the Pandora Papers are expected to yield new revelations for years to come.”

And just as the “Luxleaks, Swissleaks, and Panama Papers scandals demonstrate[d] that, highly regulated or not, banks and financial services play an integral role in global tax avoidance,” it is imperative for institutions to get ahead of the inevitable scrutiny. In the 48 hours since the leak, the ICIJ has cited enforcement agencies or leaders in 13 jurisdictions and counting that vow to take action.

At Sigma, we have developed the world’s most comprehensive risk analysis database which brings together a wide range of risk relevant data sources, including those like the Pandora Papers, to enable our clients to detect and manage risk.  Our team has ingested into Sigma’s database the information made available thus far by ICIJ in the Pandora Papers, which adds to the data already included from all of the other Offshore Leaks datasets.  The inclusion of this new data makes it easy for Sigma users of both our web-based platform Sigma Terminal and Sigma APIs to quickly detect companies and people referenced in the Pandora Papers.   See example of available information here: 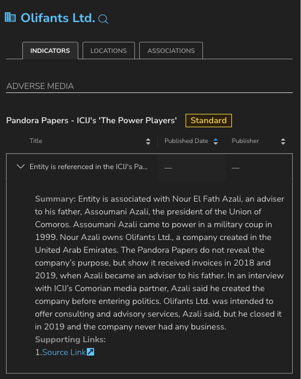 At Sigma, we are committed to maintaining the most comprehensive risk analysis database in the world, one that breaks the cycle of legacy time-consuming, costly AML and KYC workflows. With data collected from over 100 billion data points in seconds, soon to include the 2.9 terabyte from the Pandora Papers, our users feel confident knowing that all of their due diligence bases are covered.